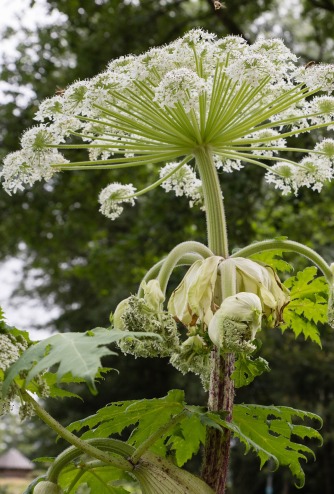 A giant hogweed plant left a Virginia boy with second- and third-degree burns to his face and arms. The 17-year old is still recovering from the incident.

Alex Childress was working at his summer landscaping job on Tuesday noon in Fredericksburg, when he unknowingly chopped down a large hogweed, a dangerous plant with sap that can cause severe damage to the skin, according to the New York Department of Environmental Conservation.

Childress, of Spotsylvania County, says the plant fell onto his face, but he thought nothing of the incident and carried the cut weed away under his right arm to throw it away. That night, however, teenager knew something was wrong when he took a shower.

“I thought I just had sunburn, so I didn’t really pay any attention. Then I got in the shower and I started rubbing my face,” he recalls. “I thought it was just a little bit of skin at first, but then big chunks of my face were falling off.”

He showed his mother, a nurse at Richmond’s Virginia Commonwealth University, and she showed Childress a photo of a hogweed, asking if it had looked like the plant he cut down. Childress confirmed, and his mother, Christy, rushed him to Spotsylvania Regional Medical Center where doctors advised that he go to VCU’s burn center.

“It felt like wind-burn, like my skin was chapped,” he tells PEOPLE. “[Doctors] had me stand in the shower for an hour and a half, scrubbing my body with soap to bring the PH level down. I had hot water running over open wounds, that was probably the worst part. That or the burn treatment where they scraped off the dead skin.”

The noxious weed first appeared in the U.S. in 1917, according to TIME. When mixed with moisture and sunlight, its sap can cause severe skin and eye irritation including blindness, permanent scarring and painful blistering, according to the Department.

The teenager remained in the intensive care unit for two days before he returned home with ointments and instructions to care for his peeling, blistering skin.

“I have to change the bandages every day,” he says. “It’s painful. Every time I take the bandage off there’s drainage. My arm is bleeding because the skin is trying to heal. It’s more than half my face and from my wrist up to the top of my bicep on my right arm.”

He adds: “I can’t go out into the sun for anywhere from two to six months. My face could be sensitive to light for a year up to two years.”